Some things to do in the garden in May.

Top 10 things to do in
your garden now

1 Photograph your garden- it is amazing how we forget.

3 Divide large clumps of perennials – we get more plants, free up space and allow for better growth next year.

4 Take hardwood cuttings – this is when this year’s growth has become harder – firmer in other words not soft.

Take care to choose a healthy parent plant free from pests or disease and use a sharp, sterilised secateurs or knife. Careful labelling is key and should include the date the cuttings were taken, along with the name of the parent plant, use a compost 50 / 50 sand in a pot. Plant around the edges of the pot. Also, there can be a low rate of success so take lots. Unlike soft and semi-ripe cuttings, hardwood cuttings do not require bottom heat or a moist atmosphere. If you have space you can also simply dig a slit trench half the height of the cuttings and fill the bottom with sharp sand or grit.

Insert the cuttings vertically, to a third to half of their length and back-fill the soil, firming them in. You can use a hormone rooting powder, but this is generally felt to be unnecessary. Water well and label the cuttings so you know what they are. A cold frame can be placed over the top to encourage faster rooting if required.

Hardwood cuttings are very slow to form roots, so don’t expect them to root fully until at least the next spring. If rooted well the cuttings will sprout strong shoots and grow away.

Ideal shrubs for hardwood cuttings are Buddleia, weigela, privet (Ligustrum), Philadelphus, forsythia and willow, but you can experiment with any woody shrub that takes your fancy. Taking cuttings is free, and if they don’t succeed, no harm will have been done. Others plants eminently suited to being propagated from semi-hardwood cuttings include many shrubby evergreens such as rosemary, sage, lavender, box, escallonia, holly, viburnum, hebe, camellia, ceanothus, cistus and choisya. Good luck.

5 Plant bulbs for spring – wait till November to plant tulips. Think also of indoor bulbs for Christmas such as Hyacinths, plant NOW for Christmas. Narcissi Paper White take 6 weeks from planting to flowering and have an amazing scent to fill your home at Christmas when they are finished flowering plant them out into your garden the same with your Hyacinths.

6 Plan your flower borders for next summer — look at midsummer magazines etc for ideas also include spring as it will help you choose bulbs. Come to Patricia’s Workshop on Saturday, November 3.

7 Get your leaf pile organised — you can’t buy leaf mould.

9 Cut your hedges before frosts – pruning at this time of year is for shape.

It is very nice to have a neat tidy garden with good structure but don’t forget to leave some areas for all the little creatures to hibernate in – so don’t be too tidy. Leaf and wood piles make great places for hibernation and shelter. I take down my hanging baskets and replace with bird feeders. Birds are essential for our gardens and they do need a helping hand. Containers with water can act as little ponds for frogs and of course sources of drinking water for our little visitors.

There are lots of other jobs to do as well, but try and get as much done now before it gets too cold to venture out.

The garden is now going to sleep, and now is also the time to plan your beautiful garden for next year.
Seed sowing at this time of year can give you a head start on Spring, roots develop and are stronger. Division of plants- making more, moving plants to better positions, planting bulbs for spring and summer. Feeding your soil, protecting it for the weather ahead- drought, are a few of what we will be covering.

An introduction to how to take good care of your garden. What plants to plant and how.

Including lawn care, pruning, plant supports, good bugs, feeds, soil testing, composting and tools. All materials are supplied.As the classes are small (max 6) we will have an opportunity to focus on your garden challenges.

Growing Herbs and using them as Medicine.

Growing Herbs and How to Use Them as Medicine

Joan runs a busy practice in nutritional therapy and herbal medicine in Dalkey, where she combines nutritional support with medicinal herbs to optimise healing. Her teaching emphasises nutritional and naturopathic approaches to chronic diseases, and her clinical experience is a valuable resource for students. She is an expert on the digestive system and its relation to immunity, and the interconnectedness of body systems.

Joan trained initially at the Institute of Optimum Nutrition and then went on to gain a BSc. honours degree in Nutritional Therapy at the University of Westminster. She followed this with a two-year post graduate diploma in Herbal Medicine and is now practising in Dalkey, Dublin as a Medical Herbalist and Nutritional Therapist.

Joan has a particular interest in the areas of stress, anxiety, adrenal fatigue and other chronic health and digestive problems and regularly attends medical and nutritional seminars. Her interest in environmental medicine has led to involvement with the anti-fluoride movement in Ireland. Joan, a keen gardener, is interested in growing her own food and using foods from the wild.

Arctic lupin seeds were found to be viable after 10,000 years lying frozen in the tundra.Dandelion can travel 200 km in a storm, fern spores have been knowing to travel 200 km from their parent. Seeds such as cleavers are responsible for the invention of Velcro.

A seed holds the complete DNA of every cell, hair, vein, leaf, petal and root, is preprogrammed and waiting for germination.

Some seeds germinate immediately some can take years, Some need to be digested by animals, some need fire for a trigger ( many S. African and Australian plants) Some need periods of cold, winter before their seed coat will break open.Have you ever wondered how a Buddleia ends up growing out of a chimney pot?

Ferns are interesting as they don’t produce flowers and for a long time were not understood.There are 2 distinct stages in the life cycle of a fern.They produce spores from the underside of their leaves, which are dispersed from the fern and they germinate. After germination, they grow into small heart-shaped plants known as prothalli. male and female cells are produced on these plants and after fertilisation, the adult fern begins to develop.

Germination is triggered by water, heat and air found in soil/compost. As light levels rise you have less risk of seedlings becoming very leggy-sweet pea — don’t panic, pick out very leggy shoots and this will encourage a stronger stem.

Have a look at

Seedaholic– great information with their packets.

Some seeds to sow now ( February) undercover — either in a greenhouse or a window sill.It is still too cold but as soon as temperatures begin to rise – March? You could begin to Harden them Off – which prepares them for the great outdoors.

Also when you sow seeds they are sown into a compost that has very little nutrition-they don’t need it as the seed comes with its own food supply. As soon as the true leaves appear the seed has become a plant and it now will require feeding — planting on. Overcrowded seed containers lead to poor growth, as there is not enough space for the young plants to thrive, therefore you have to “thin out” the seedlings, and plant on the stronger ones.

Some seeds to start now-February- seed packets will give you lots of information.

Tomatoes – like a bit of bottom heat to get going.

Marigolds (Calendula and Tagetes species) and sunflowers (Helianthus cultivars) can be started off indoors to create flower displays for the summer.

Deciduous trees and shrubs are about to “break bud”the garden is waking up, time to plant bare-rooted trees and shrubs, which are cheaper to buy now and easier to plant. The younger the whip the better it will settle well into its new home. Don’t forget to stake when planting the tree, when necessary.Don’t plant if the ground is frozen or waterlogged. 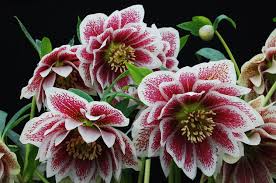 Perennials and Bulbs in flower now

Hellebores are in full bloom, so its great time to buy them in garden centres. I consider them “Excellent Value Plants”.Remove all their leaves ( they will regrow ) this allows you to see and enjoy the flowers and also make it easier for pollinators (Bees) to get in to fertilise the flowers and make new seeds.

Snowdrops [Galanthus) are popping up, people who go nuts for these tiny flowers are called “Galanthophiles”.

Daffodils-Narcissi — remember the ones you planted in the autumn? Should be looking well now and going into March. Traditionally we planted potatoes on17 March –  St Patrick’s Day, which you can but sometimes the soil can be too cold or wet-quiet often it is best to wait until April.The optimum temperature for growth is between 5-7 degrees.There are hundreds of varieties and cultivars and 3 different types of potatoes.First earlies, earlies and main-crop. 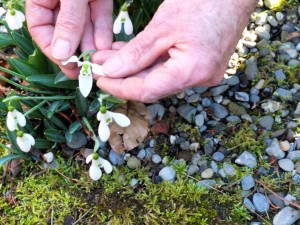 The seeds you planted earlier will need to be pricked out into cell-trays or modules, using a good quality seed compost with some nutrition.Divide clumps of ornamental grasses and bamboo now.

Jobs to do now

Comb through and Cut back spent ornamental grasses-such as Stipa tenuissima.

Divide ornamental grasses and bamboo.Tidy up and allow the new shoots to come through.

Divide large clumps of perennials that you didn’t get to in Autumn.Replant, pot up and keep until you decide where you wish to replant them, share them with friends, sell them at plant sales, compost the tattered bits.

Snowdrops (Galanthus spp)are now in full flower when they finish flowering, divide large clumps, and place them where you would like to see them next year. Share some with friends.

Check Dahlia Tubers and start to get pots ready-starting Dahlias in pots allows for strong early growth. You can take stem cuttings from the new plant, when in growth and have the cuttings producing blooms later on in the year. It also helps you to prevent slug attack as you can spot it earlier.If you have managed to attract hedgehogs, frogs to your garden they will help you with a slug problem, and also all the birds you looked after will now eat your snails. This I consider fare exchange and balance.

Cut back Cornus alba ( to encourage new growth)-that lovely red or yellow stemmed winter shrub. If it is not pruned you lose the young coloured shoots for next winter.

Autumn fruiting raspberries should be cut back to the base, as fruit will be produced on new growth.Again, hoe gravel paths, vegetable and flower beds, keeping weeds at bay will be very rewarding later on.Hopefully, you did get your mulch onto your beds in the autumn, now with lots of rain, if the soil is not covered try to cover it now either with a mulch or even leaves, protecting it from erosion and damage. Remember as temperatures increase, slugs begin to surface and commence their eating, They don’t know the difference between your Dahlia and a weed. Be vigilant and pull back large clumps of compost from plants, so as dissuading a slug from an easy dinner.

Apply slow release fertiliser such as chicken pellets in areas where there are lots of bulbs.This is the time to feed bulbs, as they are emerging out of the soil.Having a mulch of FYM or Horse manure is an overall feed also for the emerging bulbs.

Cut back spent growth, again hedgehogs etc are still hibernating — not too much and be aware.

Feed birds-much of their habitats have been removed, for nesting as well as for feeding, therefore we need to give them a hand.Domestic gardens are of great benefit to all creatures besides us!! Make sure there is water available for all garden creatures, we are all 80% water.